…at least he was nice about it

Because I certainly wasn’t.
I put on my stern look, the look I use when Emo kids are messing around in “my” store. Not that I have anything against emos in general. But when some of them are causing ruckus in my general vicinity, I put all of them in the same stable and call them horses.
Dang emos.

“The place with the signs on their window” I continued, as it seemed like the small hint of GET OUT in my voice didn’t quite get through.

“but they have two entrances”, he tried. Now my look changed to the I-can’t-believe-how-stupid-you-are-look as I said “that’s right… it’s still not here.”

He said sorry, and I almost forgave him. But then I changed my mind and just waved him out.

What makes people think that the place with no signs anywhere, two peoples name on the mailbox and the doorbell is a flat bread bakery? Especially when our neighbour, the flat bread bakery, has a huge window and two doors marked with just these words…

What made me so angry wasn’t just this guys stupidity though, it was the fact that this is the second time someone has done that. The first time it happened it was 8:30 AM and some guy was looking for the dry cleaner… (he was even more wrong than the second guy!) That time I just got so befuddled that I didn’t know what to say so I played the meek, nice little girl who showed him the right way to go. And that guy didn’t even say sorry!

Anyway, music! Husband was “pimping” some music to a friend yesterday, and just wanted to mention a band out in the great interspacewebthingy: The Ocean Collective. Post metal with really hard parts, and wonderful mellower parts. Precambrian is a concept album about, well, the pre-Cambrian days or something deep like that :P It’s totally way up on the awesome-scale! Look for the ocean on wikipedia and then go buy something of them!

Hello. I’m now testing the wordpress app on my iPhone. Whatever it takes to maybe get myself to update more often, right? ;) Besides, it’s a free program.
By testing this program I have realized (well actually I realize this every time I have to actually remember a password) that I suck at remembering passwords…
I’m pretty good at birth dates, lyrics, numbers related to work (codes, logins, bank account numbers and such), but I suck at my private passwords. And account numbers. What would I ever do without 1password?! Oh well I managed to set this program up anyway :D 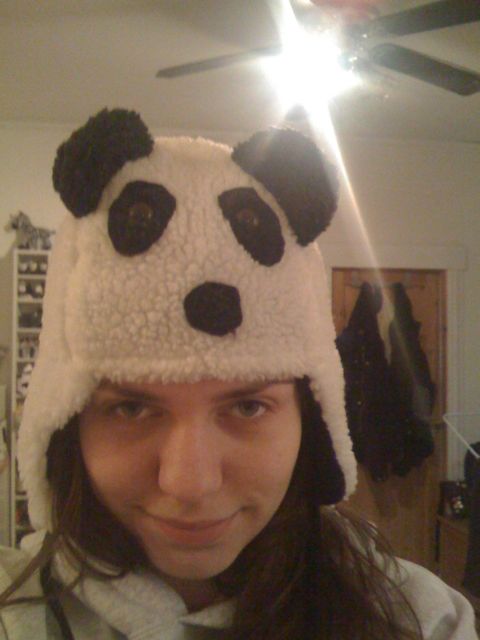 And this is a picture of me in my panda hat a cold morning.
Tomorrow it’s platemesse (record fair?) time. :D

Yup, the room behind the scary door is now ours!

We moved the book shelves from the living room in there, and are going to buy something to sit in to put there, and we finally have enough room for a freezer, so we’re buying that too! (We have only an itty bitty freezer on top of the fridge -it’ll be so nice to have room to buy both pizzaz AND chicken ;) )

Also, the fish is going to live in there instead of our bedroom.

In lieu of a sofa/something/whatever to sit in there, we put our extra mattress on the floor and covered it with all the pillows we haven’t had room for before now, (quite a few, actually!) and four blankets. It’s quite nice!

Our tiny living room feels much bigger, and now I don’t have book shelves blocking my view of the projection from the projector :P

I think husband is satisfied as well.

…some day I’m putting up a “links”-page here. But not today. Today we watch LOTR!

So, here I am, so suddenly, on the other side of the what? Hmm. Well, as you can see I’ve moved my blog. A bit lighter over here, dontyathink? Good, good. Sorry not all the boxes are thrown away and such. Not quiiite done yet, I think?

No posts lost in the move. Fancy logothingy on the top right here. (Try scrolling a bit down the page ;) )

The logo is btw my tattoo. Idea’d by me, made by husband Arne. (Well, made by Dan at Tattoo World, but you know what I mean.

The blog look was made kind of the same way. Ideas by me, Arne makes it happen.

Please, if you have a question I could put in my faq, do tell!

I need some sleep now. Moving is hard work!

Ps. Kind of scared of pressing “publish” right now. What if this first new post in the new place messes it up? Kind of like when you turn on the light in the bathroom and the electricity disappears for 5 minutes?

Halloween and other things.

Today is Halloween apparently, and an epic day at work. As the chain I work at specializes in having “everything” you need for <insert any holiday/season/happening> at a reasonable prize, (that don’t mean we have easter stuff year round, but you understand, right?) we’ve had a lot of halloween candy and costumes and accessories and lights and just STUFF in our store the last weeks. And a LOT of customers. Halloween seems to grow more and more popular in Norway. We CRUSHED last years halloween numbers this week.

So yeah, epic day today… I gasped when I counted the tills tonight and summed up the numbers. Not just thinking “wow, that was a lot”, but literally gasping loudly when the numbers showed up :P

Can’t wait to see the statistics for today, tomorrow.

This should mean that I’m also epically exhausted, but I’m not… It’s just been a really good day. Everyone in a good mood and the hours flew by :D And I got to wear some silly headwear at work :P

I said I was going to write about others things as well, didn’t I? Hm. Well, husband has told about our scary door over at his blag, much better than I can write it. So go read it there.

Now for food, and then candy and a movie.

Lesson of the day:

Do NOT listen to heart-wrecking music on the way to work.

I put on Pain of Salvation’s BE on my iPhone yesterday. Pluvius Aestivus (of summer rain) was perfect for walking home in the rain after closing up the shop.

Today, I continued with BE.

Then they took some of those messages, put music to it, and put it on their album.

I know this song makes me all emotional, and still I didn’t skip it. Bad idea! Just as the song ended, I was right outside the mall where my store is, and I didn’t have the time to put on a cheerful song before going in to work.

Sorry, Pain of Salvation, I love your music, but I’ll think twice about listening to it on a rainy, windy day on my way to work again ;)

Vocari Dei on youtube. Taken from their live dvd.

Oh, that’s right, I have a blag! Huh. Sorry… I’ll blame it on the newlywed-life! Yes! That’s a good excuse :D I’ll try to be better from now on, ok?

Three days left, now! Been running around a bit, but not too bad. Tomorrow and friday is really going to be hectic! Sooo looking forward to saturday, I just hope I’m not freaking out with stress that day. If I can manage to stay calm, it’s gonna be a beautiful day.

It’s hard to write anything good with sound everywhere around me from a tTV and such (I’m not used to TVs anymore. We’re at my dad’s place since we live 600 kilometers away), so yeah. Not really inspired today.

So, only a bit over two weeks left until I become a Mrs.

Things are under control (or at least I keep telling myself that ;) ) and I’m really looking forward to it (hello mr. Obvious.).

We’re leaving home saturday to go to Porsgrunn and run around fixing stuff the next two weeks. I have the day off today, and I’m probably going to pack and work on my non-existent tan and write a list over all the stuff we just CAN’T forget to bring with us. Toothpaste? No big deal. Arne’s suit and the things we’re using as place cards? Big deal :P

I’m not really having an urge to write today (as you can probably tell), but I woke up too early and my internet is empty already. Anyways, hope to see some of you on our big day. The ceremony is at 2PM (or 14, as we 24hour-clock-people like to call it) and I’m going to be breathtakingly beautiful (lol).

How not to act when you buy things from me, lesson 1

If I tell you that “I’m sorry I can’t wrap that as a present for you, I’m all out of paper today!” How do you answer? I’ll hurt the ones who say “Ridiculous! Now what am I going to do? It’s going to be a present!”

Despite her snotty tone towards me, I kindly suggested that she buy a roll of present paper (We sell that! And CHEAP!), but her answer was

I come with a blue-eyed suggestion that there’s always the chance that she’s going to need it later…(at least for christmas!) (Notice that I say that with a smile and a cheery retail-voice)

“HAH! I never wrap my own presents. I get the people that works in stores to do that!”

“o…k. I’m sorry, but I can’t help you. More paper isn’t going to magically appear back here!” (Still said in a sickening nice voice and with a smile.)

This was, of course one of the first customers today. It helped that one of our regulars was next in line and looking ugly at bratty lady the whole time.

Wow, I needed to rant a bit.